Winter is the way of life in the north country.  Even in the summer a northern breeze seems to carry a bit of the arctic with it. On the warmest of summer days it seems like a person could climb a white pine and see winter on the edge of the northern horizon. It is March 27th, and the snow is still over two feet deep in the yard. A friend went snow-shoeing with her daughter today. 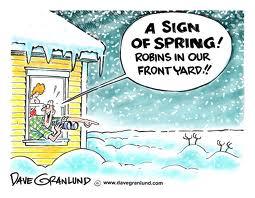 Still, the season is ripe for signs. Just last week I smelled a skunk. Their odor, normally unpleasant, is one of the most welcome scents this time of year. Despite temperatures that are well below freezing, the smell means that the skunks are coming out of hibernation and beginning to become active.  They are looking for mates. In May they will give birth to their young. Skunks are a nuisance most of the year, but when a whiff of their smell is carried on the winter breeze, it is a sure sign that beneath all of the cold, winter is weakening ever so slightly.

This morning I thought I heard geese flying overhead. A check of a nearby river proved I was right: there was a patch of open water with 8 Canadian geese swimming in it. The sight of geese would not be noteworthy in June, but I haven't seen the geese for almost half a year. I watched them for a while as I pondered the fact that I had survived another winter.

Last week my attention was drawn to another faint sound I had not heard for months: running water. It was the smallest of trickles, but my heart leaped at its sound. The sun, so low in January's sky that it carries no heat, had finally risen enough to begin the process of melting the snow. The south facing drifts are the first to feel its effects. Over the coming weeks there will probably be another snowstorm or two, but things are different now. The melting of the snow has begun. It will take weeks to finish. The lakes will open up around the last week of April and then in May the hills will begin to turn the faintest of greens.

The magic of late winter in the north is not something that attracts tourists, yet it is more wonderful than going to the beach for the sun and a swim. To know what the trickle of water means you have to go through a half-year of enduring the bitterness of winter. You have to have changed a tire when it is -30, driven countless miles on snow-covered roads, and despaired of ever truly being warm again in order to understand the smell of the skunk, the honking of geese, or the simple trickling of water.

That is why I will miss it...because the end of the northern Minnesota winter is not something that you can ever visit. If in the future I return to the north at the end of March, I will only be able to remember what those signs once meant. I won't be able to truly experience them again. They will be a part of the wonder of my northern Minnesota past that I will never forget and always cherish.